This year I made 55 Valentines! There are so many beautiful Valentines for the women/girls in your life but what about the men?  And boys?  Here are some I came up with this year. 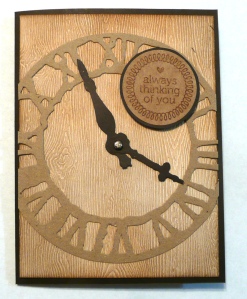 This used some elements from the January Simon Says Stamp card kit. I used the woodgrain paper and colored it with Antique Linen and Vintage Photo distress inks. I then cut the clock out of craft paper with dark brown paper for the hands. The die is Weathered Clock from the Tim Holtz Alterations by Sizzix. I stamped the sentiment included in the kit on a kraft paper sticker also included in the kit and mounted it on dark brown paper, cut around the sticker and adhered it with a pop dot.

Here’s the card I made for the teens and tweens. I saw the Technique Tuesday stamp set “Love Always Wins” and realized it would be a perfect sentiment for the older boys on my list. I used paper from the SEI collection “All Star” for the background and stamped the sentiment on red paper. I mounted it on black and there you are. Inside I stamped the sentiment included in the set – “live in the moment, Love Life”. Perfect for boys! 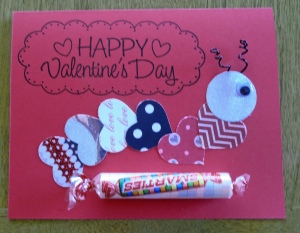 Here’s the one for the little boys. Hearts were punched out from assorted Valentine papers – no pink! – using the heart shaped Martha Stewart punch. I used black wire from the jewelry department to fashion the antenna.

The last 4 are all based on the Mini Valentine Blueprint Stamps from Tim Holtz and Stampers Anonymous. 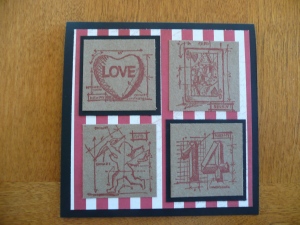 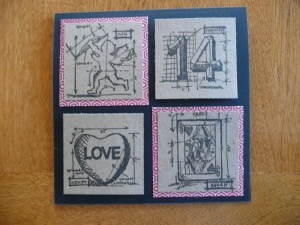 I have a lot of grandkids…. a LOT of grandkids – 24 to be exact with 25, 26 and 27 on the way. I also LOVE making things for my grandkids although at this point it’s a bit like an assembly line. I found this idea for Valentines on Pinterest – my new favorite thing!

I used my Pazzles to make the front of the hearts. Besides cutting out the hearts I can use a pen tool to have the machine write. Easier than stamping, prettier than handwriting, especially if you’re a bit OCD – or CDO with all the letters being in alphabetical order, as they should be (joke also courtesy of Pinterest). 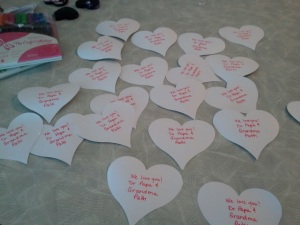 After writing and cutting the hearts out I then wrote the recipients name on the front and signed the back. 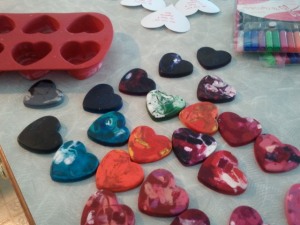 I took old crayons, took off the wrappers and melted them in the oven using a silicone heart baking pan. (300 degrees for 15 minutes) It took 4 crayons for each heart. When you take them out of the oventhey will look like a solid color but underneath they’re not so after the first batch I would take a knife and swirl the color a bit. Let them cool and pop them out.

Tie twine around the hearts, attach them to the card with a foam square and you’re ready to go. (I think this one looks like it’s from Twilight.)

All the Valentines sorted by families ready to go.....